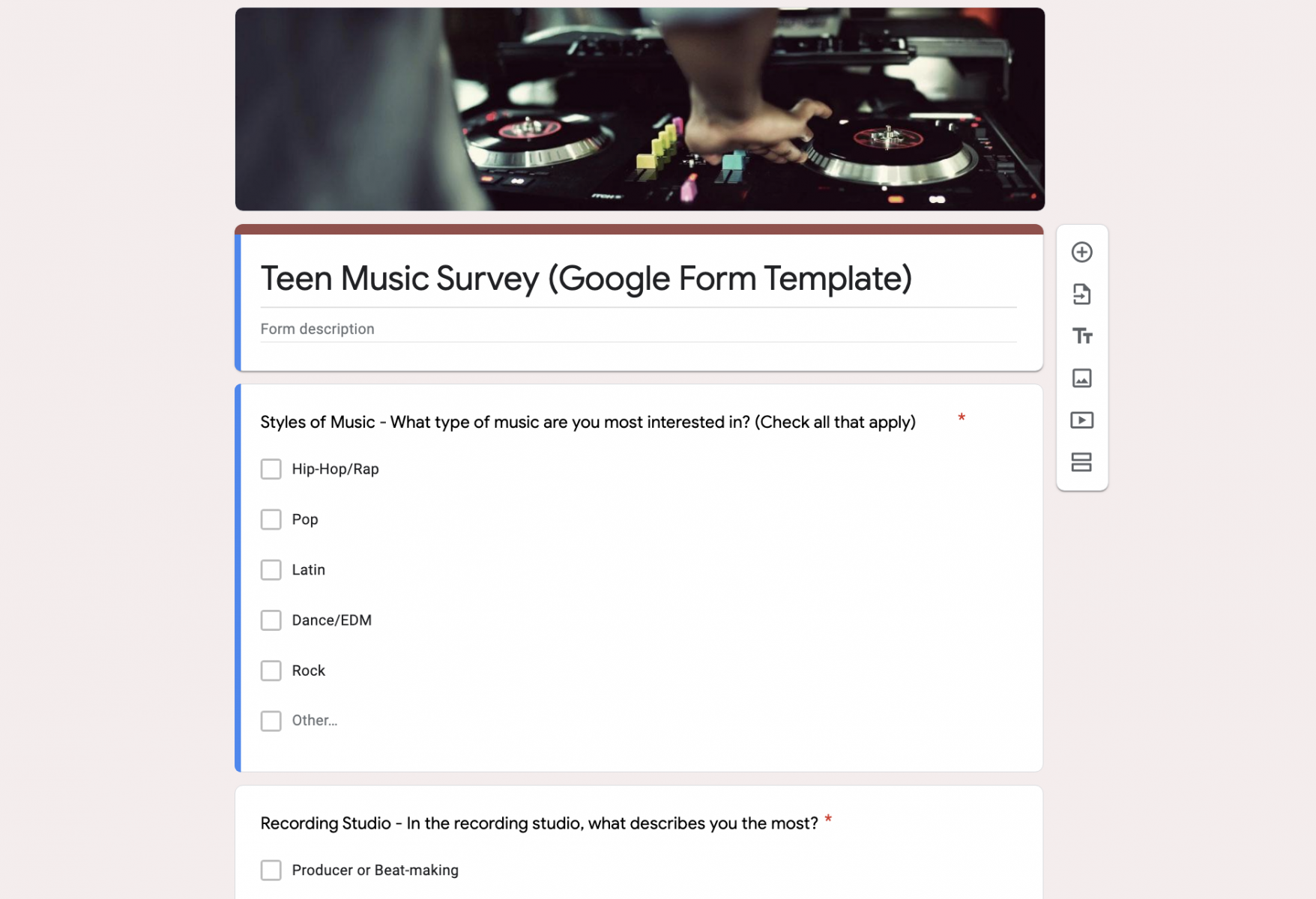 Copy this Google Form Teen Music Survey
Before starting your own after-school music program, it is helpful to understand what type of music programming is most interesting to your participants. What was popular and trending a month ago (let alone how you learned to play music) may not be what current teens are into. Click on the Google Forms link below to make a copy of our sample “Teen Music Survey” Google Form Template. Feel free to edit your copy and send it to your teen participants to collect valuable feedback on what types of program ideas, workshops, performances, or changes to the program they would like to see.

Click on the link below to make a copy of our sample “Teen Music Survey” Google Form Template:

Or, if you would rather start with an editable word document of sample questions click on the free download below:

Styles of Music – What type of music are you most interested in? (Check all that apply)

Recording Studio – In the recording studio, what describes you the most? (Check all that apply)

Music Industry – What topics are most interesting to you? (Check all that apply)

Instruments – What instrument/s are you interested in? (Check all that apply)

Other areas of interest – Check any of the following that you may also be interested in:

Optional – What are your top 3 favorite artists or songs? 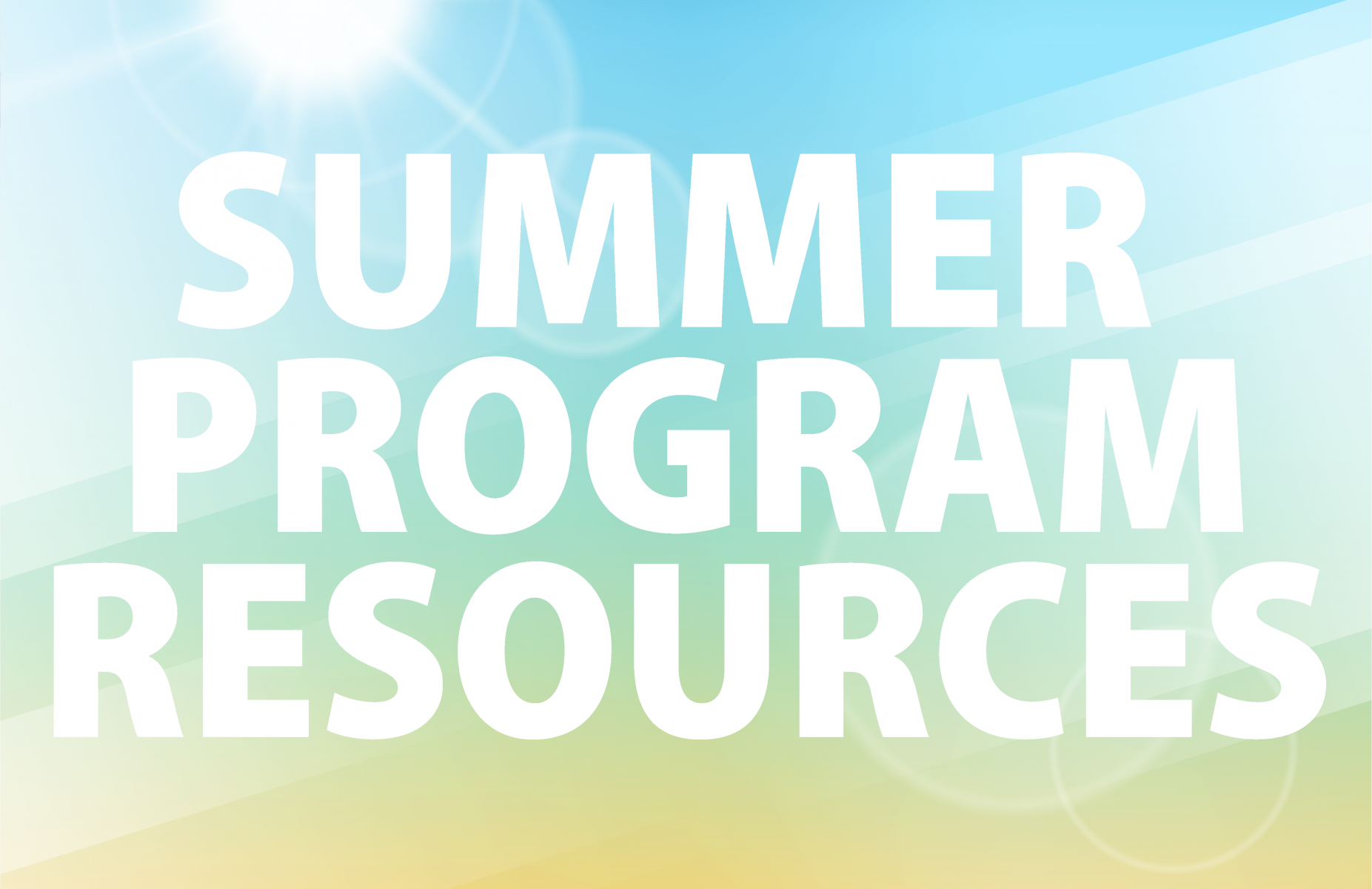 Thank you to our generous Music Impact Network members who have helped create the following resources for after-school music programs and summer camps. If you would like to share and feature your Summer programs please contact info@musicandyouth.org

Fun and unique “Do It Yourself” activities including – Naming Instruments, Guitar String Bracelets, Recycled Guit-ART, Drum Head Do-over, Embroidery Headphones, MintySynth, Musical Timeline, Drumstick Design, Make Your Own Cajon, Makey Makey Beats, Build Your Own Ukulele, Press Your Own Vinyl Record, Vibe Lighting Materials needed to run these activities can range from no cost to about $100

Reclaim your participants’ passion for music by introducing them to the limitless possibilities of sampling and field recording. We’ve curated a list of projects to help your participants reconnect with each other and their surroundings as they recover a sense of creativity. Sample Your Summer takes advantage of the nice weather, the smartphone devices they already have (no additional equipment required), and a world reopening around them… through sound.

Whether your summer music camp is going to be all virtual, in-person, or a bit of both, below are some programs to help engage your participants this summer. Download includes ideas like 4 Virtual Programming Ideas, Virtual Listening Party, Tackling Social Issues in the Music Industry, Rhythm Roulette (Using Splice), and Cover Song Challenge.

So your participants had a great summer experience… now what?!

Does this sound like your typical summer experience? You spent countless hours forming relationships with camp members teaching them to play instruments, record songs, perform on stage and more. The summer ends and you never see those participants again… it’s frustrating! Below are some strategies that have worked for seasoned Youth Development professionals to help retain summer participants in the new school year. 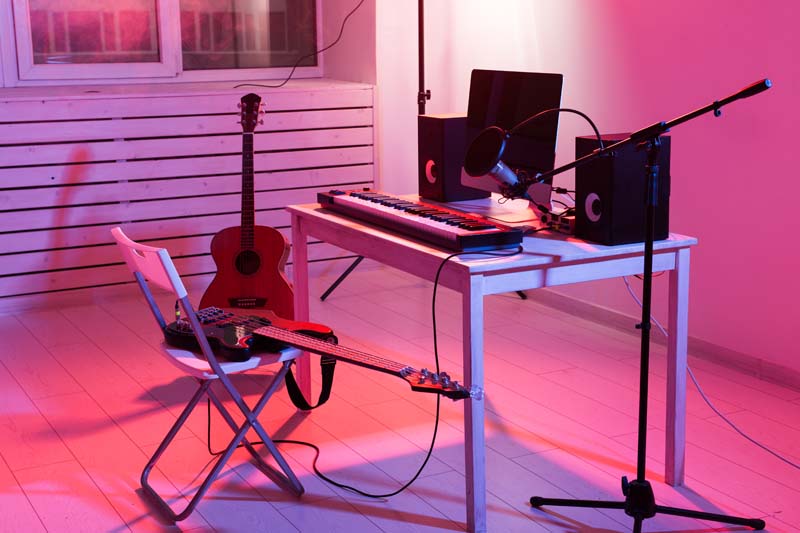 The placement of your Music Program facility is critical to its success and can significantly affect other program areas as well. Below are some practical guidelines to consider to identify the right space for your Music program facility.

Similarly, Music programming can be disrupted by noise from areas outside their facility, such as: 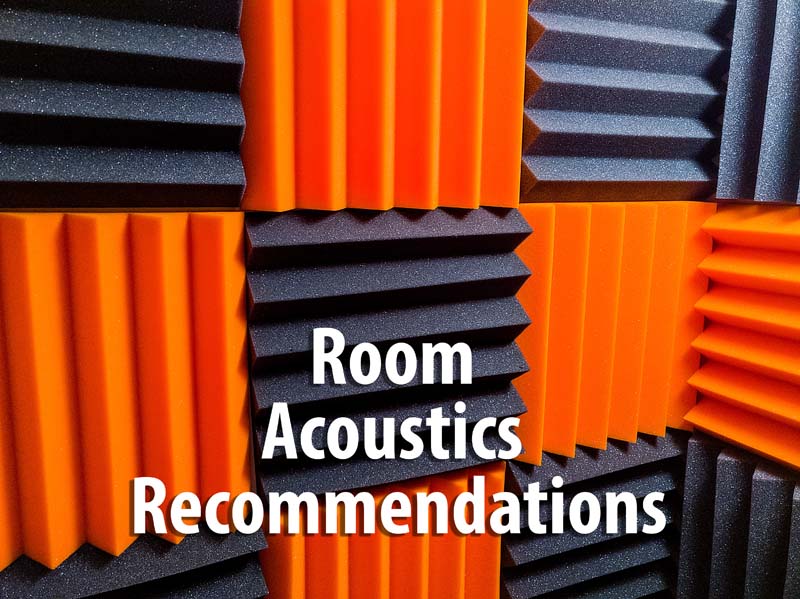 Room acoustics refers to the sound properties within a particular room.  You want to control the amount of echo or reverberation by absorbing or diffusing the sound within a room, primarily through using soft materials and irregular wall surfaces.  If you have ever dined at a crowded restaurant with all hard surfaces, you can relate to the issue of not having effective room acoustics!

A common misconception about the properties of sound is that acoustical materials (like “egg crate” foam”) will also provide soundproofing characteristics, but generally, they do not.  Room acoustic treatments only affect the sound properties within a space, not how sound is transmitted to and from a space. You’ve likely experienced this when a car with a loud stereo system passes by. While the treble frequencies are absorbed by the car’s interior fabrics, the thump of the bass frequencies can continue to be heard as the car drives down the street. Bass frequencies carry more energy and have longer wavelengths making them trickier to absorb.

Consider these acoustical treatments for your Studio/s and multipurpose room/s:

Note: smaller rooms have more echo and reverb than larger rooms and may require greater attention.

Give your participants access to instruments while at home

Covid-19 has been disruptive to many after school programs and many participants can’t afford to have instruments at home.  Give your participants access to instruments and production equipment to help them continue to make music at home. The types of instruments have been specifically selected for at home use and can help music program staff implement virtual lessons and projects.

NOTE: Any featured products are based on the experience and opinions of Network members and Music & Youth. We do not receive any financial benefit from the vendors to promote their products. We just thought they were helpful and you might like ’em.

Best Instruments for At-Home Use:

Example Requirements – Below are some examples that other organizations have used – Customize the requirements to meet your needs: